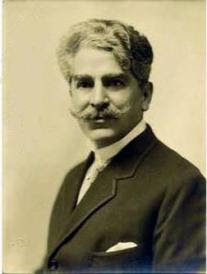 Nahan Franko was an American violinist, conductor, and concert promoter born (in New Orleans) on July 23, 1861 (Brahms was 28 years old.) He made his New York debut in 1869, at age eight, and then went on to study with Joseph Joachim and August Wilhelmj in Europe. Instead of embarking on a solo career, he played in professional orchestras most of his life. He became the concertmaster of the Metropolitan Orchestra in 1883, at age 22, and stayed until 1907. On November 30, 1904, at age 33, he conducted Mozart's Marriage of Figaro, thus becoming the first American conductor to conduct at the Met. He subsequently conducted there more than sixty times, though not all of his performances were opera productions. As an assistant conductor and concertmaster he was being paid what would be about $96,000 in today’s dollars. (Today’s concertmasters earn about $350,000.) In 1908, he was one of the first to present open air concerts in New York City. An interesting piece of trivia about him is that he was (briefly), the brother-in-law of the owner of the New York Yankees (Jacob Ruppert.) Franko died on June 7, 1930, at age 68.
Posted by MUSE at 12:03 PM No comments:

I will soon be ordering a custom violin - my very first. It will be a replica of the Paganini Cannone. I am not yet at liberty to disclose the maker but in time I will. I expect it will be a fabulous violin. It will not play itself of course, but playing Mozart and Beethoven on it will be that much more pleasurable. Perhaps Prokofiev and Poulenc as well.
I have long believed that 60% of the sound of any violin comes from the player - the violinist's bow arm. The rest comes from the instrument. If you don't believe me, go hear a concert by the San Francisco Symphony. The current concertmaster is playing Heifetz' Strad. I think it's the Dolphin. It does not sound the way it did when Heifetz had it. It has nothing to do with the technique because Barantschik is a great player. It is all bow arm and that comes from intuition. A great violin however, makes it that much easier to get the sound out - your sound.
Posted by MUSE at 1:55 PM No comments:

OK. Listen carefully ladies and gentlemen. I found this new site which produces music editing and writing software. Its name is FLEXIMUSIC. You'll know how to find it on the WEB I'm sure. (Fleximusic.com) I am about to try its software because I like writing music. I will then compare it to the other programs I have. You know what those are - Sibelius, Cakewalk, Finale, etc.. Now, you'll be able to write music to rival the works of Beethoven, Mozart, Haydn, Vivaldi, Stravinsky, and maybe even Bernstein. Or, if not, you'll have fun trying.
Posted by MUSE at 6:02 PM 1 comment:

If the great composers were still alive today, would they still be writing great music? Or, would they be caught up in the minimalist, atonal, and serial movements? I'm talking about Handel, Mozart, Tchaikovsky, Beethoven, Bach, Verdi, Brahms, Vivaldi, Haydn, Stravinsky, Sibelius, Bizet, Schubert, Puccini, Prokofiev - those men.
Posted by MUSE at 7:32 PM 1 comment: