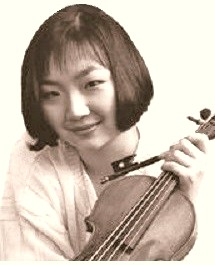 Juliette Kang is a Korean violinist (many would say American or Canadian) born (in Edmonton, Alberta, Canada) on September 5, 1976.  She is currently the associate concertmaster of the Philadelphia Orchestra.  She began her career as a soloist but gravitated toward a high position as an orchestral player, a choice that possibly provides the best of both worlds since she continues to successfully concertize as soloist, chamber musician, and recitalist.  (Sometimes, orchestral players leave orchestral work to launch solo careers but that is very rare – only Janos Starker, Zino Francescatti, Emanuel Vardi, Pablo Casals, William Primrose, Emanuel Vardi, Berl Senofsky, Lynn Harrell, and Tossy Spivakovsky come to mind.  It is far more common for soloists to abandon the touring life in favor of a more tranquil existence as a first-desk orchestral player and/or teacher at a top music school.)  Kang began violin lessons with James Keene (concertmaster of the Edmonton Symphony) when she was 4 years old.  Three years later, she made her debut in Montreal.  Two years after that, at age 9 (or 10), she entered the Curtis Institute in Philadelphia where her main teacher was Jascha Brodsky, a well-known violin pedagogue.  At Curtis, she also studied chamber music with Felix Galimir.  In 1991 (after graduating from Curtis), she began studying at the Juilliard School in New York under Hyo Kang and Dorothy Delay.  She was 15 years old.  At 16, Kang made her New York debut in March, 1993 at the 92nd Street Y.  Between 1983 and 1994, Kang won major prizes at several violin competitions here and abroad, including first prize at the Yehudi Menuhin violin competition in 1992 and first prize at the Indianapolis Violin Competition in 1994.  She was 18 years old when she won the Indianapolis competition.  (Among the top 60 prize winners since the Indianapolis competition’s inception in 1982, only six or seven players have achieved high-profile international recognition – Leonidas Kavakos, Simone Lamsma, Clara-Jumi Kang, Sergei Khachatryan, and Augustin Hadelich.)  After many solo appearances, Kang began her orchestral career in 1999, playing with the Kennedy Center Opera Orchestra.  She was 23 years old.  She then played in the first violin section of the Metropolitan Opera Orchestra from 2001 to 2003 – Raymond Gniewek had just retired as concertmaster.  From 2003 to 2005, Kang was assistant concertmaster with the Boston Symphony.  In 2005, at age 29, she was appointed associate concertmaster of the Philadelphia Orchestra.  Now, she has curtailed her solo appearances to just three or four concerts per season.  As is customary, she also gets to be a featured soloist with her orchestra.  On her first solo appearance with the orchestra in 2012, she played Prokofiev’s first concerto.  In November of 2014 she played the Stravinsky concerto and in January, 2018 she played Bruch’s Scottish Fantasy with the orchestra.  Her discography includes her solo recital at Carnegie Hall and the Wieniawski and Schumann concertos with the Vancouver Symphony.  Kang plays a Camillo Camilli violin constructed in 1730 (approximately.)  I do not know whether she has or has had any students.