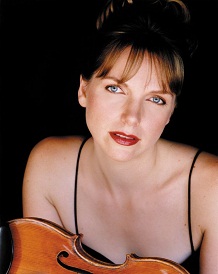 Pip Clarke is a British violinist and teacher who, although concertizing all over the world, has been living in the U.S. since 1990.  She is known for playing in a very Romantic and expressive manner and is frequently compared to legendary violinists Ruggiero Ricci, Jascha Heifetz, and Tossy Spivakovsky.  Her tone has been described as haunting and her style as breathtakingly romantic, though that description might be far too limiting.  She also has in her repertoire a work which is a particular favorite of mine – the Bruch second concerto in d minor, which is seldom played nowadays.  Clarke is also one of only two violinists I know of who does not have a website – Silvia Marcovici is the other.  She has appeared with over 70 orchestras in the U.S. alone and has appeared in recital in the most important venues in Canada, Asia, and Europe.  Clarke began her music studies on the piano at age 5 (in Manchester, England) and her violin studies (with Ruth Parker) two years later.  For six years she studied with Roger Raphael at Chetham’s School of Music in Manchester, then with Lydia Mordkovitch (pupil of David Oistrakh) at the Royal Northern College of Music and later still with David Takeno at the Guildhall School of Music in London.  Her public debut was at age 16 at the South Bank Center in London.  She embarked on her very busy career upon graduation and has been concertizing ever since.  Clarke also appeared on British television with English composer and conductor Michael Tippett.  Her American debut took place on October 27, 2007 at Carnegie Hall with the Korngold concerto.  Although her repertoire encompasses all of the standard concertos, she is especially lauded by critics for her interpretations of Bruch’s Scottish Fantasy, and the Walton, Korngold, Goldmark, and Dvorak violin concertos.  Reviewing a recent CD release, a well-known critic said: “She blazes impetuously with plenty of dash and brio...she’s no mere purveyor of bland, unruffled, unengaged precision.”  Of her first CD release, Musical Opinion (the oldest classical music journal in England) wrote that it included “one of the most compelling accounts on record of Chausson’s Poeme.”  One of her most recent recordings is of Lee Actor’s brilliant and unabashedly romantic violin concerto, a work commissioned especially for her.  You can listen to it here.  As almost all concert artists now do today, Clarke participates in music festivals far and wide, including the well-known Ravinia Music Festival near Chicago.  Clarke also gives master classes in the U.S. and Europe.  In recital and in recordings, her accompanists have usually been pianists Sandra Rivers (accompanist of Sarah Chang as well), Scott Holshouser, and (composer-pianist) Marcelo Cessena.  Clarke has played violins by Joseph Guarnerius and Matteo Goffriller, but her present violin is a modern (1983) violin by Sergio Peresson.  Other musicians who own or have owned Peresson’s instruments include Yehudi Menuhin, Pinchas Zukerman, Isaac Stern, Norman Carol, Jaime Laredo, Eugene Fodor, Ivan Galamian, Mstislav Rostropovich, and Jaqueline du Pre.  If you’ve been reading this blog for a while, you might recall that Peresson was a Philadelphia violin maker (luthier) whose instruments were in so much demand, he had to stop taking orders for violins in 1982.  As far as I know, their sound is indistinguishable from the very best Stradivarius or Guarnerius violins.
Posted by MUSE at 9:27 AM 7 comments: 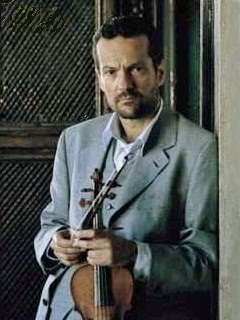 Giuliano Carmignola is an Italian violinist, conductor, and teacher born (in Treviso, Italy) on July 7, 1951.  He is known for his career as an eminent exponent of Baroque music.  However, his repertoire encompasses works from the early Baroque to late modern.  His repertoire includes the Schumann violin concerto, a piece which has an interesting history.  Nonetheless, his discography is focused on the Baroque.  He first studied with his father.  His later teachers included Luigi Ferro, Nathan Milstein, Franco Gulli, and Henryk Szeryng.  Among the music schools he attended are the Venice Conservatory, the Accademia Chigiana (Siena, Italy – school of Salvatore Accardo, John Williams, and Daniel Barenboim also) and the Geneva Conservatory.  From early in his career, Carmignola has collaborated with many conductors, including Claudio Abbado, Roberto Abbado, Trevor Pinnock, and Christopher Hogwood.  He has regularly played and recorded with various chamber orchestras – the Virtuosi Di Roma (1970-1978), Mozart Orchestra, Il Giardino Armonico, Basel Chamber Orchestra, Academy of Ancient Music, and Venice Baroque Orchestra are among them.  A similar path has been taken by Vladimir Spivakov and Fabio Biondi.  Carmignola's best known recordings are probably his complete Mozart concertos, complete Haydn concertos, a number of Pietro Locatelli concertos, the Four Seasons (Vivaldi), and several two-violin concertos by Vivaldi with Viktoria Mullova.  YouTube has many videos of his playing, including one of the Brahms Double concerto.  You can hear one such video (of the Summer portion from the Four Seasons) here – it is played at the fastest tempo I have ever heard.  He spends almost all of his time in Europe and did not make his U.S. debut until 2001 at the Mostly Mozart Festival in New York.  Since 2003, he has been an exclusive artist for the Deutsche Gramophone label.  Carmignola has taught at the Advanced Music School in Lucerne (Switzerland) and at his old school, the Accademia Chigiana.  His violins include the Baillot Stradivarius of 1732 and a 1739 violin by Johannes Florenus Guidantus.
Posted by MUSE at 12:28 PM 4 comments: 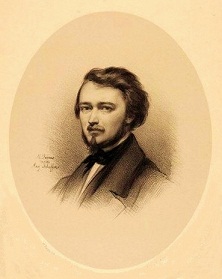 Hubert Leonard was a Belgian violinist, teacher, and composer born (in Bellaire) on April 7, 1819.  He is mostly remembered for having taught – for almost 20 years - at the Brussels Conservatory where Charles De Beriot, between 1843 and 1852, had also taught.  Leonard later settled in Paris where he continued to teach privately.  Among his most celebrated students were Henry Schradieck and Martin Marsick.  As a child, he began his studies with his father and even gave a public concert before entering  the Brussels Conservatory in 1832, at age 12.  From age 9, he had also been studying privately with an obscure teacher surnamed Rouma - this is probably one and the same as Francois Prume, another Belgian violinist who at age 17 (1832) was already professor of violin at the Liege Conservatory and who was only 3 years older than Leonard.  Leonard enrolled in the Paris Conservatory in 1836 where his principal teacher was Francois Habeneck.  He was 17 years old.  Funding for his studies came from a wealthy merchant.  He left the conservatory in 1839 but stayed in Paris where he was employed by the orchestras of the Variety Theatre and the Opera Comique.  He toured through various European cities from 1844 to 1848.  A single source gives a different date for this event in Leonard’s life (1845.)  In Leipzig, he met Mendelssohn who briefly tutored him in composition.  Leonard also learned Mendelssohn’s concerto and played it on tour.  The concerto had just then recently been premiered in 1845 by Ferdinand David but Leonard was the first to play it in Berlin with Mendelssohn on the podium.  Leonard began teaching at the Brussels Conservatory in 1848 (Grove’s Dictionary says 1847), at age 29, but continued to tour sporadically, extending his tours as far as Norway and Russia.  After quitting the conservatory in Brussels in 1866, he again settled in Paris, where he spent the next 24 years.  Leonard’s compositions include five (or six) violin concertos, duos for violin and piano, a cadenza for the Beethoven concerto, fantasias, salon pieces, and etude books for violin, including a book entitled 24 classic etudes.  I am not certain but I’m pretty sure the concertos have never been recorded.  Supposedly, Leonard once said “The bow is the master, the fingers of the left hand are but his servants.”  Leonard died in Paris on May 6, 1890, at age 71.  He had owned a G.B. Guadagnini (1751), an Andrea Guarneri (1665), and two Magginis, one of which went to his widow, who sold it in 1891.
Posted by MUSE at 12:34 PM No comments: 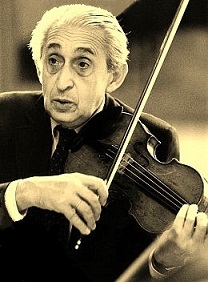 Lorand Fenyves was a Hungarian violinist and teacher born (in Budapest) on February 20, 1918.  He is known for having spent much of his career in Canada and is credited with helping establish an entire generation of musicians in that country.  His teachers in Hungary included Jeno Hubay and Zoltan Kodaly, internationally known violinist and composer, respectively.  Though he made his professional debut at age 13, he graduated from the Franz Liszt Academy in 1934, at age 16.  Two years later, having been recruited by Bronislaw Huberman, he left Europe for Israel to become a founding member of the Palestine Symphony (Israel Philharmonic.)  He soon became its concertmaster.  He was 18 years old.  In 1940, he helped found the Israel Conservatory and Academy of Music in Tel Aviv.  He also organized the Israel String Quartet, originally known as the Fenyves String Quartet.  He moved to Switzerland in 1957 (at age 39) where he was concertmaster of the Orchestre de la Suisse Romande and violin professor at the Geneva Conservatory.  He visited Canada in the summer of 1963.  The following year, he accepted a one-year position at the University of Toronto.  He actually remained there until his retirement in 1983.  In 2003, the University gave a recital in honor of his 85th birthday – a common thing for universities to do for their revered music professors.  After his retirement from the University of Toronto, Fenyves began teaching (in 1985) at the University of Western Ontario.  Nevertheless, he also gave masterclasses at music centers around the world and performed as violin soloist with well-known conductors and orchestras numerous times.  You can listen to Fenyves play a Bach Sonata in this YouTube audio file, recorded when he was about 70 years old.  Among his pupils are Tasmin Little, Elissa Lee, Scott St John, and Lynn Kuo.  Fenyves died (in Zurich, Switzerland) on March 23, 2004, at age 86.  The 1720 (circa 1720) Stradivarius violin which he owned – now known as the Fenyves Strad – was sold at auction in 2006 for about $1,500,000 USD.  Fenyves had purchased it in 1961.
Posted by MUSE at 9:01 AM 1 comment: