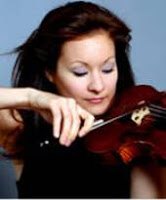 Kyung Wha Chung is a Korean violinist born on March 26, 1948. She began her music studies at the age of three but first took up the violin at age seven. She studied with Ivan Galamian (at Juilliard) and Joseph Szigeti, among others. She has concertized around the world and recorded most of the standard violin repertory. There are also videos of her playing on YouTube.
Posted by MUSE at 9:49 PM No comments:

Angèle Dubeau is a Canadian violinist born on March 24, 1962. She studied at Juilliard and at the Montreal Conservatory of Music. She is best known for her work with the group called La Pieta. This ensemble is an all-female string band. As far as I know, she still plays the Rosiers Stradivarius violin from 1733. There are many CDs of her playing solo and in ensemble.
Posted by MUSE at 4:30 PM No comments: 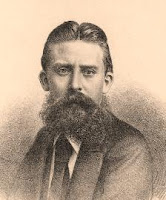 Carl August Nicholas Rosa (Karl August Nikolaus Rose) was a German violinist and conductor born on March 22, 1842 (Brahms was 9 years old.) He began his career as a violin prodigy, having studied in Leipzig and Paris. In 1863, he was concertmaster of some orchestra in Hamburg though I don’t know which orchestra. He began his conducting career while in Hamburg. From 1869 to 1872, he toured the U.S. with an opera company he formed with a singer who became his wife sometime during the tour. The operas they staged were sung in English. In 1873, he and his wife started the Carl Rosa Opera Company in England, which survives to this day. None other than Gustav Holst played (first trombone) in this company's orchestra for a while.  Another man who played in the orchestra was (violinist) Marie Hall's father. (After Rosa's death, the company introduced opera to the masses by offering reduced prices for an entire season.) Rosa died suddenly on April 30, 1889 at age 47.
Posted by MUSE at 7:37 PM No comments: 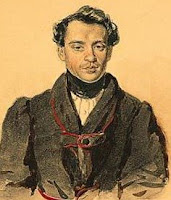 Johann Strauss I (Johann Strauss Sr.) was an Austrian violinist and composer born on March 14, 1804 (Beethoven was 34 years old.) He began studying the violin at age twelve, approximately, but, as far as I know, never studied to become a concert violinist. He joined a dance orchestra in his youth which he also helped conduct. In 1825, he formed his own band and began to write music for it to play. His most famous piece is probably the Radetzky March. He was the father of three sons who became popular composers. Strauss died in September, 1849.
Posted by MUSE at 7:44 AM No comments: 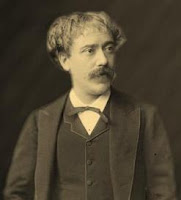 Pablo de Sarasate (Pablo Martín Melitón de Sarasate y Navascués) was a Spanish violinist and composer born on March 10, 1844 (Mendelssohn was 35 years old). His first studies were with his father at age five. At age eight, he performed in public for the first time. At twelve, he entered the Paris Conservatory where he studied with Alard (son-in-law of Vuillaume) and others. His Paris debut took place in 1860 and he henceforth concertized around the world. Several works in the standard violin repertoire were either composed or dedicated to him. Many works which he composed for the violin are also in the standard repertoire and will probably hold their place there forever. Practically every article on him affirms that he was an outstanding, virtuoso violinist. In a brief interview, the Hungarian violinist, Tivadar Nachez, relates how Sarasate twice forgot passages in the third Saint Saens concerto (which had been dedicated to him) while playing a concert performance at which Nachez was present. Nachez also stated that Sarasate did not know how to properly play Bach. There are a few recordings of his available (made toward the end of this career.) Sarasate died in September, 1908, at age 64.
Posted by MUSE at 11:05 AM No comments:

Tomaso Antonio Vitali was an Italian violinist and composer born on March 7, 1663 (J. S. Bach would not be born for another 22 years.) He is mostly famous for a very popular chaconne in g minor for violin and piano which has been attributed to him, despite questions as to its provenance. Ferdinand David (German violinist of the Nineteenth Century) heavily reconstructed or arranged the piece many years later. Vitali died in 1745. I really don't know if this is what he looked like. The portrait may or may not be that of Vitali, but some people say it is.
Posted by MUSE at 11:15 PM No comments: 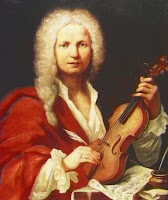 Antonio Lucio Vivaldi was an Italian violinist, conductor, teacher, and composer born on March 4, 1678 (7 years before J.S. Bach was born). He was nicknamed the Red Priest because he was ordained while in his early twenties (though he almost never served as such) and he had reddish hair. He wrote over 500 concerti (approximately 350 of these are for solo instrument and strings, and of these about 230 are for violin; the others are for bassoon, cello, oboe, flute, viola d'amore, recorder, lute, and mandolin. Approximately 40 concerti are for two instruments and strings, and approximately 30 are for three or more instruments and strings), 46 operas, 73 sonatas, lots of chamber music, and lots of sacred music. His most famous work is The Four Seasons, written in 1723. Vivaldi died in July, 1741 (Bach would live another nine years.)
Posted by MUSE at 9:26 PM No comments: